skip to main | skip to sidebar

New Stuff on this Blog

There's a selection of Photographs Richard has taken over the years here these have just been put up so ignore the posting date, Richard is a time traveller !
Posted by Andrew Glazebrook at 7:14 PM No comments:

Some new stuff added into the Domestos section of the Blog !
Posted by Andrew Glazebrook at 6:28 PM 2 comments:

...I hear you cry, and you're not talking about your next batch of internet bought herbal Viagra. No, it's finally happened, Richard Dolan, or Richy Pickle as he sometimes goes by, probably on the sort of website your mother shouldn't see, has finally got a blog/gallery online. The twist is it's getting run by me Andrew Glazebrook on his behalf, although Richard can click a mouse, use a wacom tablet and even send e-mails, anything beyond that makes his cerebral cortex start to smoke.
I've been given a selection of pictures by Rich to post. Hopefully we'll have some updates to see, as I'm going to try and get Rich to give me some of his older work to put in a special post.

I've disabled all comments except for on this top post, so if you want to comment on Rich's wonderful work then do it here.

Who is Richard Dolan ?

I first met Richard Dolan in 1983 at Acklam Sixth Form College, he sat near me in Art class. 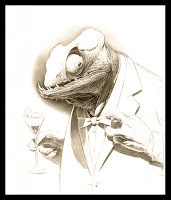 I remember one of the tasks set by the art teacher was to do a picture entitled 'Tea on the Lawn'. Now I suppose people might envision Victorian ladies sat in the park sipping Tea from China Cups. Richard's picture was of a corpse laid on the grass being pecked at by crows. 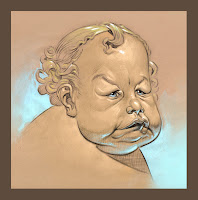 It was when we were given the task of 'Mechanical Operations' that I first remember talking to Richard, I'd started drawing a line up of robots whilst most people were drawing Cranes and Engines, and Rich said "Those are neat, do you like Star Wars ?" This was at a time when it was cool to be a Star Wars fan. :) 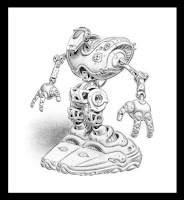 The thing that's always amazed me about Rich is he can turn his hand to anything art wise, draw, paint, sculpt etc... all with what looks like no effort at all, though if you look closely sometimes a small bead of sweat starts to emerge just below the hair line.

Richard dropped out of college and taught himself to draw and paint by copying the masters, as in the two examples above. 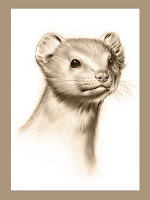 Back in the 80's Richard was a fabulous cartoonist, winning the Young Cartoonist Award twice. Eventually they told him to stop entering and give someone else a chance, either that or Boss Hogg would be sent round to break his fingers. 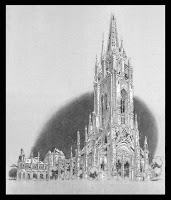 He also had a fascination for Horror movies and made Super 8 gore pics. Some of the prosthetic work he did on friends is something I hope he digs out. I know they're old now, but they still deserve to be see as examples of his early work.

When he's not missing somewhere in the wilderness shitting behind the nearest bush Richard works on Film, TV, Advert concept work and also does his own original pieces if he has time. Rich's film work has included working on The Frighteners for Peter Jackson, some of the work from that can be seen further down the page. 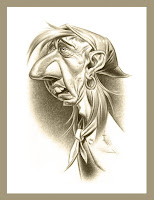 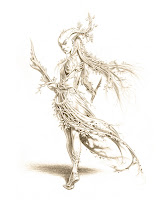 I suppose like a lot of concept artists Richard has worked on many projects over the years that have never seen the light of day, due to creative, financial reasons etc... This Blog will showcase some of those illustrations from Film and TV. 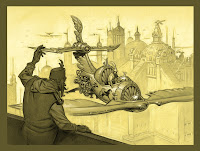 Richard used to work solely in oils, but he now sketches his pictures in pencil, which he scans and then paints in the computer. He can occasionally be found down in the garden shed sniffing Turpentine for that old school high, mind you. 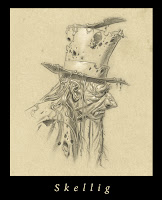 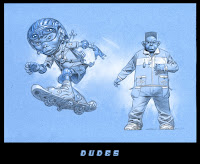 He really is one of the most talented artists I know, and he won't chuck me out of a moving vehicle on the A19 Motorway when I fart in his campervan, that's a mate for ya !

All artwork here is Copyright 2007 Ricard Dolan
Posted by Andrew Glazebrook at 4:07 PM

Posted by Andrew Glazebrook at 4:05 PM

The Cheese Inferno was a picture that Richard did for TV star and Comedian Vic Reeves.
Posted by Andrew Glazebrook at 4:01 PM

The above concepts were for a remake of The Incredible Mr. Limpet which was due to star Jim Carey.

And these two fish were for Bad Trout which was due to be directed by Robert Zemeckis in 2000, both films are either in Limbo or cancelled.

Posted by Andrew Glazebrook at 3:56 PM

The above shark was sculpted for the film Lara Croft Tomb Raider: The Cradle of Life, the sculpture was scanned and turned into a CG shark by London based FX studio Double Negative.

This mean pooch is one of my favourite sculpts by Richard, I know he did a painted version of this which I'll try and get him to dig out for an update.

And if that was the beast then here's beauty, another wonderful character sculpture.

Posted by Andrew Glazebrook at 3:46 PM 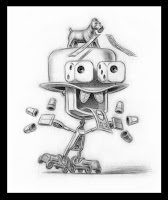 Posted by Andrew Glazebrook at 2:45 PM

Way back in the early 90's, when Richard was still in short trousers, he painted these covers for 2000AD comic as well as a story with everyone's favourite head butter Mean Machine.

The above picture was based on a photograph of friend and fellow artist Dean Roberts This may sound far fetched but the face he's pulling was just like that in real life...I'm so glad they keep Dean in a secure facility now.
Posted by Andrew Glazebrook at 2:36 PM


Richard has been working on Domestos adverts for a number of years now, he gets as much bleach as he can drink, which is great as he was almost finished his last crate of Harpic. 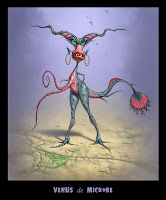 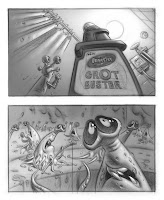 Not all the adverts are shown on UK TV, so some of these germs you might recognise and others you may not. 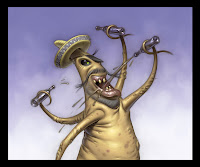 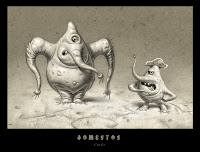 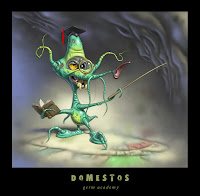 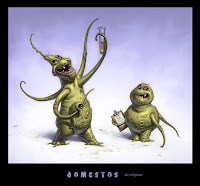 The smaller one of these germs reminds me of Doberman from the Sgt Bilko show, I'm not sure if that was intentional. 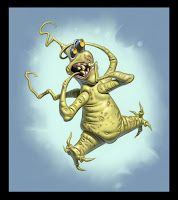 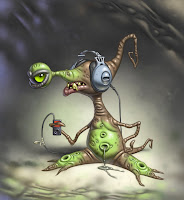 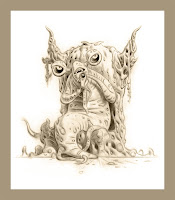 I love this one, he's kind of the Jabba the Hutt of the germ world. Fabulous chair he's sat on. 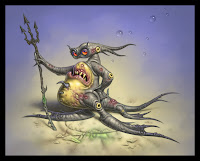 And here is a small selection of the actual commercials, superbly produced by Uli Meyer studios.


Posted by Andrew Glazebrook at 2:16 PM